The lighting on the top of One World Trade Center offered a different challenge. As the top of the tallest building in New York and the United States, it offered the ideal spot for designing a multi-color moving light show.

Many people involved with the building felt that this was not a showplace but a shrine and that clever tricks would not be appropriate. The design team spent quite a bit of time considering what this should be.

From the beginning everyone knew that the top of the new World Trade Center had to be iconic. Occupying such an important place in New York City, namely the highest point in the city, the tower needed to be more than just iconic or decorative, it had to serve a civic purpose. Traditionally, the tallest building or tower in a city would have been a clock tower or used for hoisting flags. In one of these work sessions, the idea of a beacon was raised. 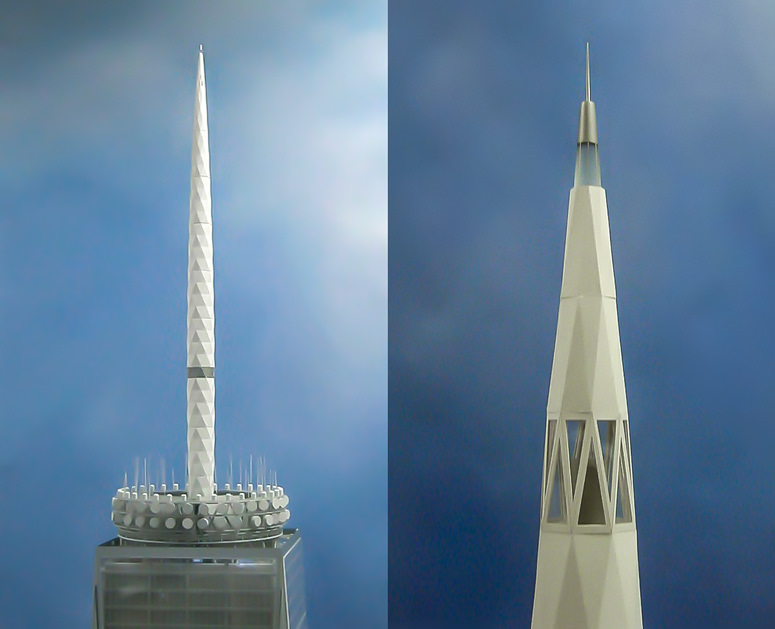 1: Early Model of The Beacon

Having done the lighting design for the original twin towers, I recalled that Minoru Yamasaki’s had expressed a desire to have a lighthouse on top of the building that could have identified the Port of New York when approached by land, air or sea. He wanted it to be like Ambrose Light, the lighthouse off the coast of New York that broadcasts a dot and a dash of light to spell the letter “N” which stands for New York for all ship captains approaching the city.

David Childs and Jeffrey Holmes of SOM agreed the idea for a beacon on top of the antenna on top of the new tower was a good one and enjoyed it further, knowing it was part of the vision of the architect of the original Twin Towers. This was presented to Ownership, who concurred, and the design team was told to begin to explore the mechanics of such a beacon.

The Beacon was one of three parts to lighting the top of the One World Trade Center. There was also the lighting of the sculptural radome antenna and the lighting of the mechanical plenums which take up 12 of the last 16 floors of the top of the building. The antenna and the mechanical plenums had to be lighted so that the beacon would not just be floating in the sky, to tie the beacon to the building.

The pre-eminent challenge of the design for the beacon was dealing with the elements four seasons of the year at 1,776 feet in the air and working out a reasonable means of maintenance. The Beacon could only be reached by scaling a 400-ft-high atop the tower and then working inside a space capsu le no larger than the Apollo space capsules. Any replacement parts needed to be able to fit into a back pack.

We immediately started sketching what mechanisms it would take to make the Beacon. We needed very strong sources of light with a very tight beam and a turntable. And it all needed to fit into this capsule that is the size of the Apollo space capsule. It could also only be accessed once a year, so lamp life was critical. 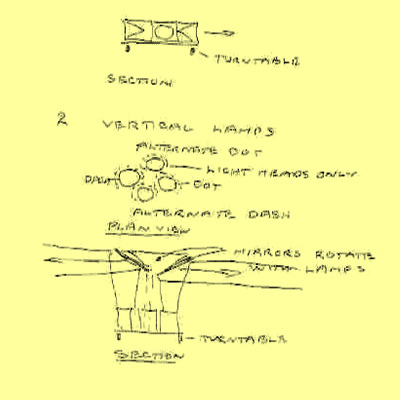 3: Early C.R.E Sketch of the Beacon 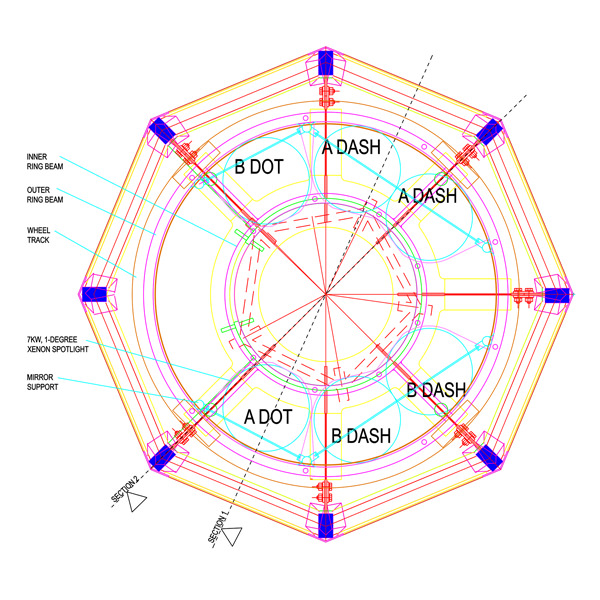 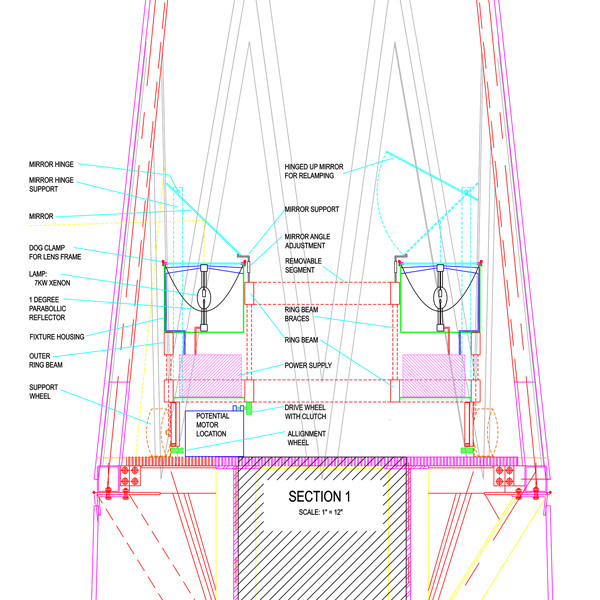 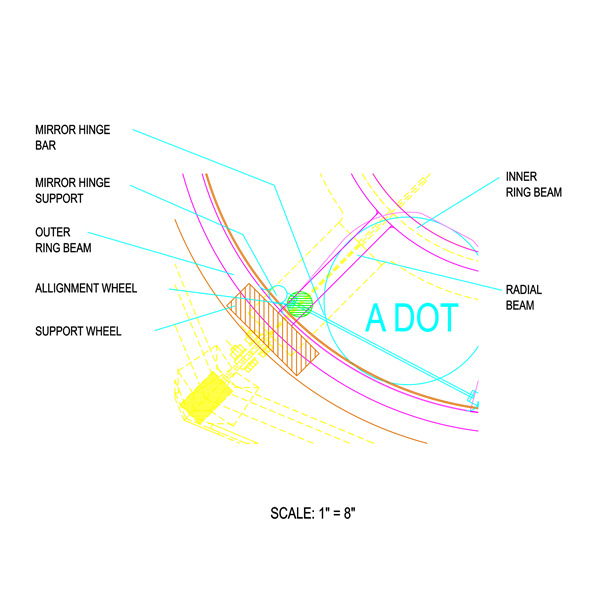 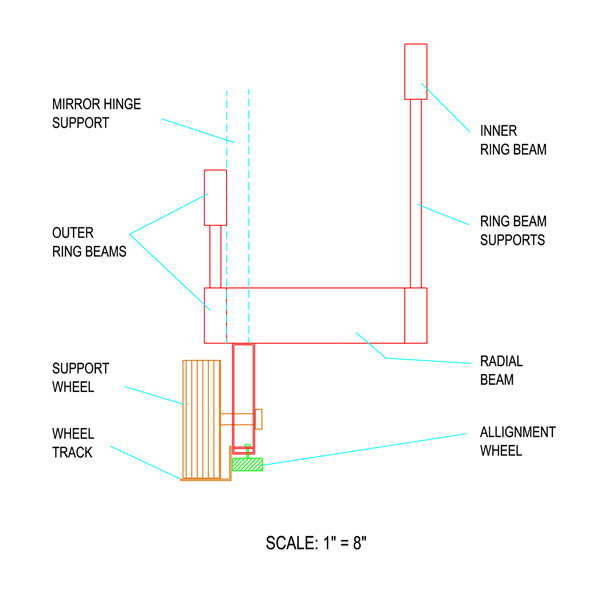 We enlisted John Luhrs of Strong Lighting to advise us on spotlight technology. We calculated it would need a center beam candlepower of 659 x 106. We estimated that the dot could be made by a 1° beam spread to 3° horizontally and the dash could be made by spreading that degree unilaterally to 6°. The dash was actually to be formed by two lights next to each other. Because of the cramped space we knew we would have to mount the fixtures vertically and shoot into a mirror. We estimated we would need a 7KW xenon lamp mounted vertically in a parabolic reflector. The color of the light was to be crystal white. The xenon lamps did not have a year-long life, so we planned to have a redundant system: 2 lights for the dots and 4 lights for the dashes.

Because of the limited space for the system and its location at the top of a 400-ft antenna on top of a 1400-ft tower, we knew coordination for construction was critical. A performance spec for this system alone had to be put together long before Contract Documents in order to be able to put together a team capable of designing and building the system and getting that coordinated into Tishman’s construction program of the tower. Along with the performance spec, we also required that any bidder organize a team with experience in building in extreme situations.

Even though the performance specification was released showing xenon lamps, alternative light sources were welcomed. One has to remember that at the time, no manufacturer in the world made an LED light with a beam tighter than 20°, and a very messy 20° at that.

The team selected for creating the Beacon was JR Clancy for the turntable, project management and installation and Strong Lighting for the development of the lighting system. Strong then worked with Carpe Diem for developing high-power LEDs and special acrylic optics to focus the light beam down to 3°. Barbizon developed the lighting controls.

Early on in the design process, there had been discussions about being able to double the power of a spotlight by shooting at an angled mirror from above and below, but Strong and Clancy took this to the extreme creating a giant mirror that reflected light from above and below. The developed huge arrays of acrylic blocks which they called petals. 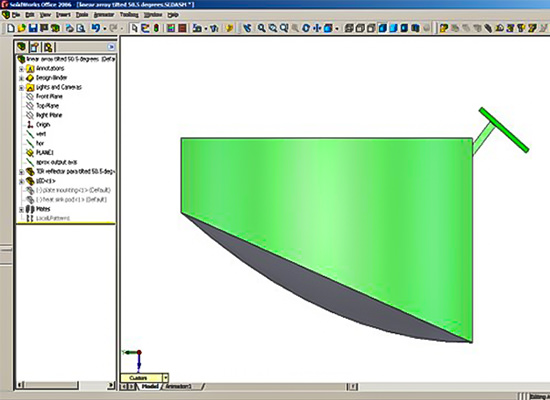 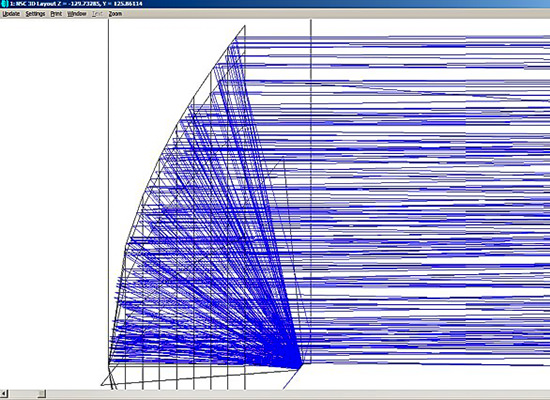 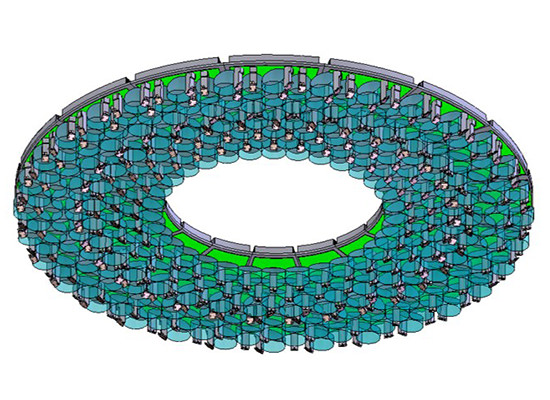 Very large LEDs were housed in acrylic straws which directed the light down to a reflector at the back of a block of acrylic which then redirected the beam straight up or down. Effectively, they populated the whole ceiling and floor of the Beacon capsule with acrylic wave guides to create a single 3° beam for the dot and a 6° beam for the dash. 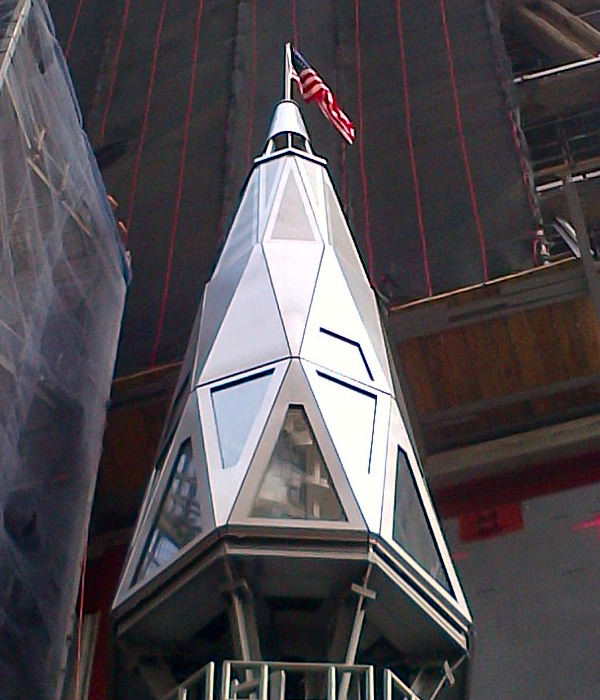 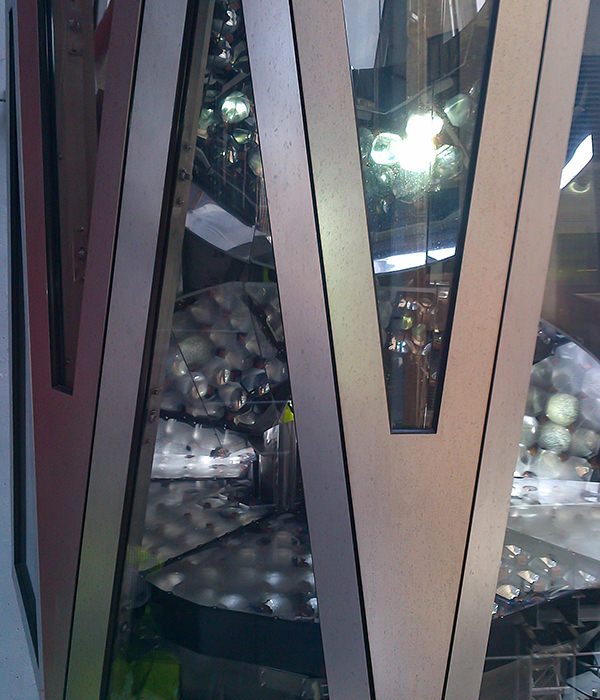 12: Beacon at the Base of the Freedom Tower, 13: Inside the Beacon

For more on the building of One World Trade Center there two documentaries produced by NOVA available on PBS. 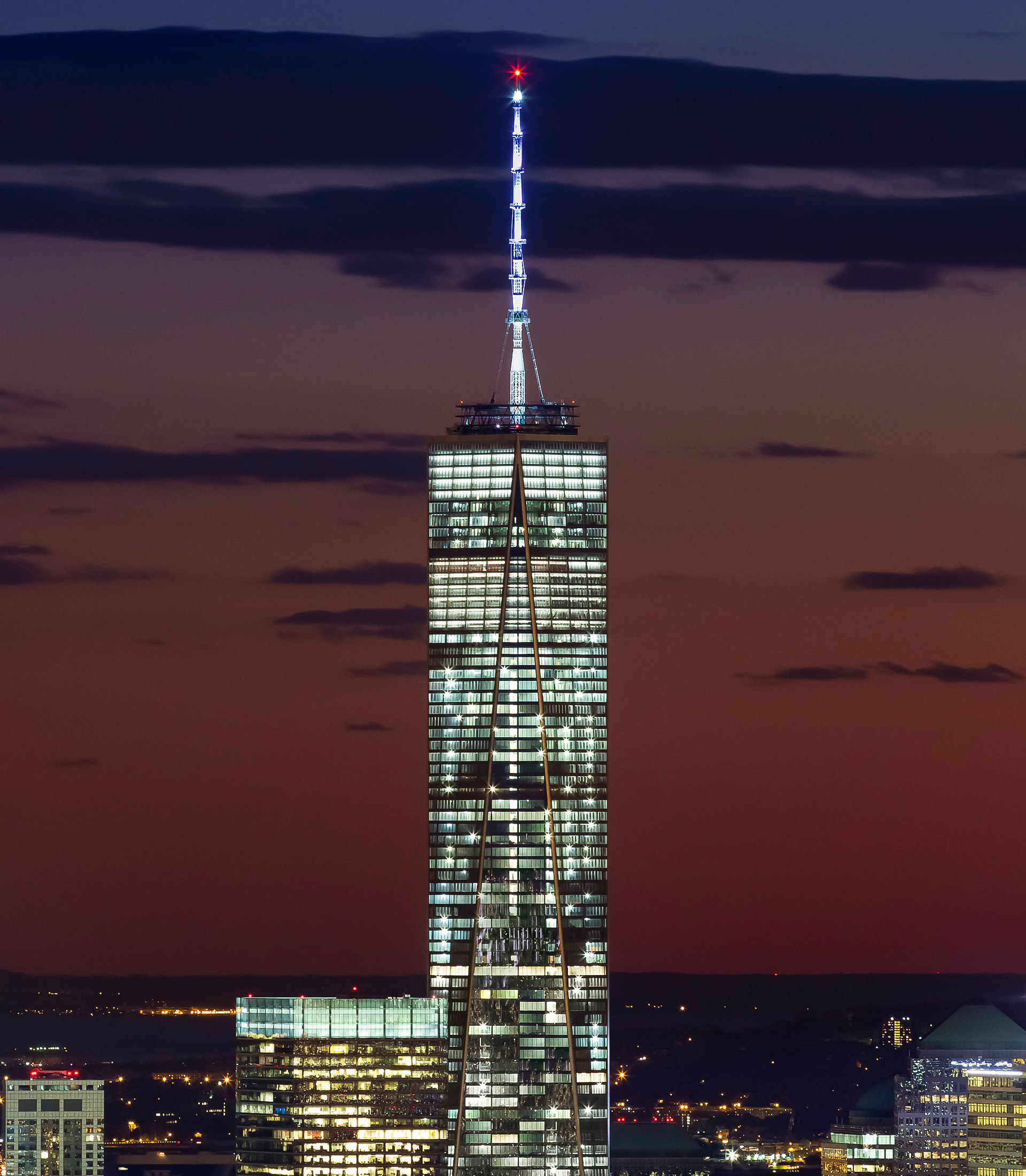 14: Building and Beacon at Night

Back to Stories Within Storeys